CARTOGRAPHICS. The writer-collector-artist Georges Adéagbo displays his discoveries in the Gallery of Barbara Wien in Berlin 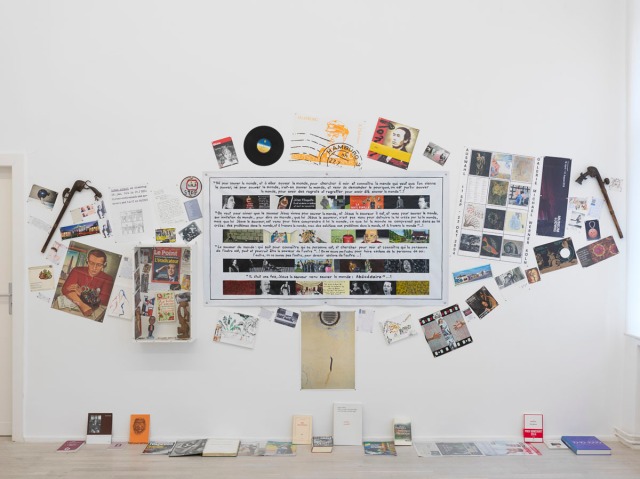 The bulging belly of wood arches towards the viewer as if he wanted to make the showcase, in which he can be seen among other found objects, books, brochures, photos, notes, burst at the next moment. The antique torso from West Africa is part of the mixed media installation „L’Abécédaire de Geoges Adéagbo: la civilisation parlant et faisant voir la cultur“, translated, „The A-B-C of the artist Adéagbo: civilisation speaks and shows culture“.

Before the visitor starts thinking about the slogan, he or she will notice that this is not only the title of the exhibition at the Galerie Wien located at the banks of Landwehrkanal, but that each of the eleven installations, which are made up of found objects and collaborative commissioned works, all of which were created this year, is named after this phrase. There is a principle behind this. Because nothing stands above or in front of the other with Adéagbo – everything is indifferent. That provokes, falls out of the frame. The display on the floor, for example: it is a prayer rug and floor protector at the same time, surrounded and covered by books, fetish figures and newspaper clippings, which open up a generous courtyard of meaning for the visitor, leading to showcases and on to wall object to wall object, record sleeves, naïve picture panels, African sculptures, magazine pictures and much more. The viewer wanders, reads, and finally gets entangled in the laid-out pitfalls of high and low, high culture and mainstream, and the post-colonial here and there of the now seventy-eight-year-old artist from Benin.

It took a bit of luck for these merrily proliferating assemblages to be admired in Barbara Wien’s gallery. For Adéagbo still does not see himself as an artist and does not fit into the art business. That is where chance has driven him. He was born in 1942 in what was then Dahomey in the important West African port city of Cotonou, where he still has a studio in his parents‘ homestead on the outskirts of the city. The eldest of the family escaped the domestic constraints by studying law in neighbouring Ivory Coast and France, but after the death of his father had to take his place, which he refused to do and had to pay for with isolation and forced admission to a psychiatric clinic. Meanwhile, he spent his time writing and collecting, but his activities did not make much difference. Both, stories and objects, which chance on the street or flea markets brought him, he laid out into broad mind maps, in which stories could sometimes condense, sometimes move apart. Only after twenty years of isolation did a French curator discover him in 1993 in the former French colony. In 2006 Adéagbo became one of the outstanding stars of Okwui Enwezor’s documenta 11.

Now this exceptional personality is present for the second time at Barbara Wien. But not as Master of Ceremony, as one might assume, but as Princeps inter pares of a multiple authorship, to which the gallery owner belongs just as much as the Hamburg friend and curator Stephan Köhler or the painting colleague who contributed the naïve text-image panels. This is definitely worth seeing, especially as it creates a subtle antithesis to the presumptuous architecture of the Humboldt Forum’s idiocy of the Berlin City Palace with its cross and eagle armour, which, contrary to better knowledge, is believed to be able to adequately present precisely such discrete gifts of civilisation.

This site uses Akismet to reduce spam. Learn how your comment data is processed.